All aboard: 33 finishers head to the bahamas for complex cruise repairs

In addition to being the UK’s largest repair specialists, sometimes our work requires us to head overseas. One of our more exotic projects saw 33 of Plastic Surgeon’s finishers fly over to the Everglades in Florida to complete renovations and repairs on a number of jacuzzi hot tubs on a cruise ship owned by one of the world’s most prestigious cruise lines.

Plastic Surgeon has an established relationship with this particular cruise company having worked with it on several previous occasions. In this instance, Plastic Surgeon was called upon to restore 8 Jacuzzi hot tubs on deck 15 of the ship – one of the main features of the cruise liner – after a number of repair companies based in the US said they couldn’t meet the tight seven-day deadline set down by the cruise operator ahead of its next voyage.

The tubs requiring repair are filled and re-filled every day with a high chlorine content in the water, up to 30 people can be in there at any one time, which – given the frequency of use – means they are prone to comparatively quick degradation.

With 6,400 prospective guests due to arrive on the ship later that week, Plastic Surgeon’s finishers had to use their extensive experience to complete the job ahead of embarkation. The repairs that were required included sealing any damage and replacing the grip on the steps and base of the hot tubs. 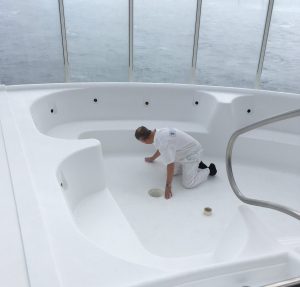 Whilst undertaking the works, the ship went to sea for three days during the planned week of repairs, so the team had to carry out the work while battling the elements in the open ocean.

Despite the challenges presented to them, the team managed to restore the eight hot tubs to their former standard. The client was delighted with the work, especially given the complexities of the job at hand and the extraordinarily tight deadlines.

Plastic Surgeon’s Sales Director Mike Aitken said: “From the start of this project, our team of finishers was up against tight deadlines and extreme elements. The finishers had some logistical delays to overcome, but the team was brilliant, pulling it back and getting the repair work done to the highest standard. The client was incredibly happy with the work the finishers carried out, which is always our aim.

“The fact that we were able to fly such a large number of finishers to an international location on such a short timescale is an example of the flexibility and agile nature of our capabilities. Having 200 directly employed finishers on our books means we’re able to meet complex client requirements in an efficient and timely manner to provide an unparalleled repair service.”

Our repair guy turned up when expected, was polite, friendly and knowledgeable. The work didn’t take too long and the finished repair looks fantastic and is 1/10th of the price of a replacement worktop. I thoroughly recommend Plastic Surgeon

The engineer was efficient and abided by the present “stay safe” rules..the work he did was amazing and so cleverly matching the marble effect on the wall covering..very talented. A polite person and left the shower clean and tidy

My husband came home and couldn’t even see where the damage originally was, it was that good. The finisher was polite, friendly and has done such a professional job we are over the moon.

Although we were initially concerned the repair would be visible, Chris has done an absolutely brilliant job and we honestly cannot tell where the repair is! The job took no time at all and he was extremely helpful and friendly. Would definitely recommend their services.

I was absolutely delighted with the service and results from this firm. The friendly technician, Darren, arrived when expected. I was absolutely over the moon when I saw the finished repair. Nobody would know there had been burn marks on my kitchen worktop. As it’s a relatively new kitchen, you can imagine how pleased I was with the results. I would recommend this firm 100%. Well worth every penny

Clare arrived at the correct time and worked so professionally on our kitchen worktop. It was like new when she finished and so much less hassle than having to have all new worktops. Brilliant. Well done!